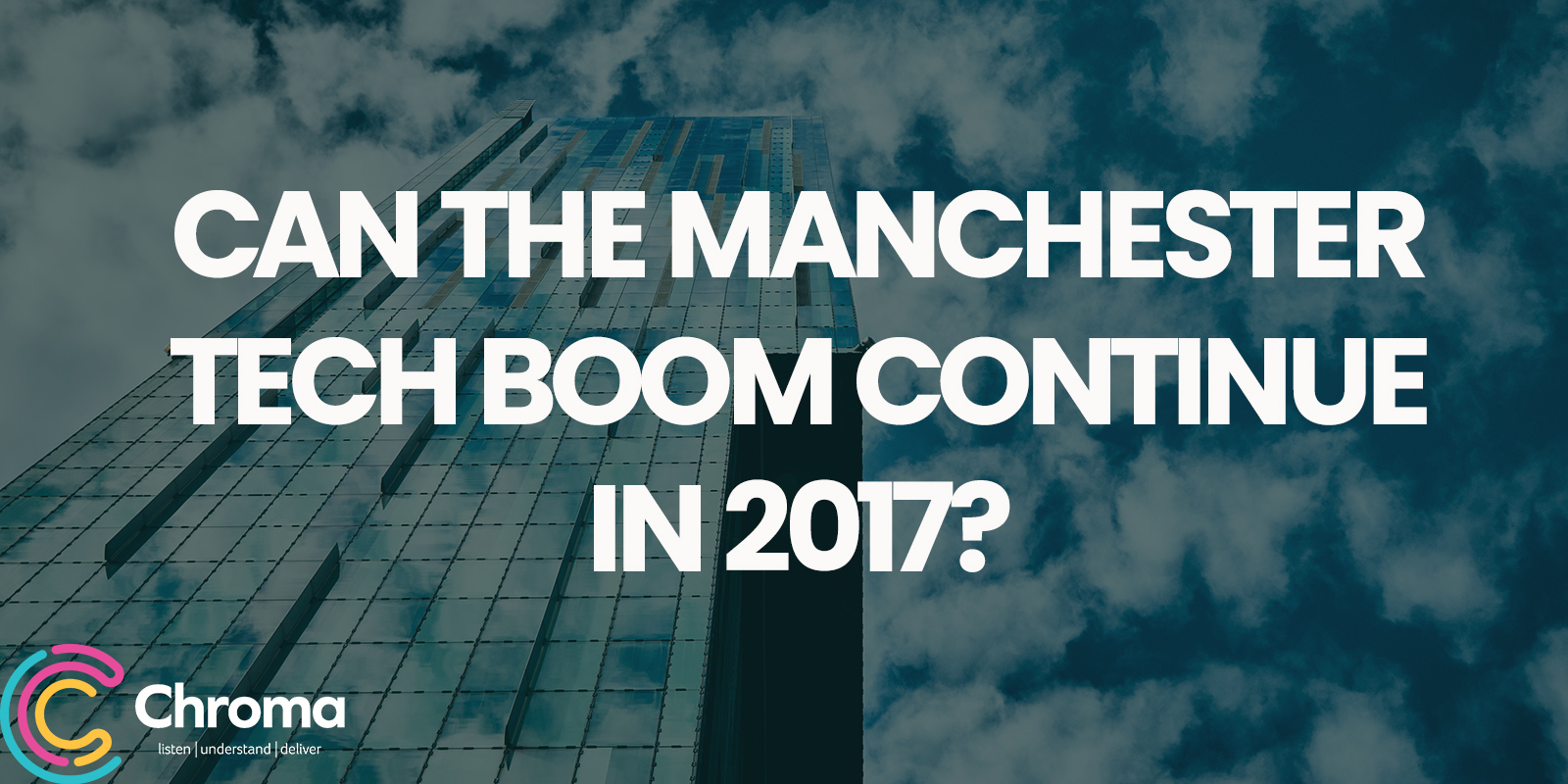 Can the Manchester Tech Boom Continue in 2017?

With only London achieving a higher growth in GVA (Gross Value Added) since 2010, most tech businesses will agree 2016 was a fantastic year to be in and around the Greater Manchester area. The average digital salary increased 9% to £45,205 and people are asking if we can expect the same growth in 2017 and more importantly, what’s fueling it? In this article we lift the lid on the reasons for this boom and examine if it’s realistic to expect it to continue into 2017.

According to digital firm WiredScore 77% of those surveyed list Manchester’s strong transport links as a big draw to the city. The continued £1.5bn Metrolink expansion has taken the network from 37 stops in 2010 to 92 at present. This investment has made more areas accessible to potential digital employees, not only in the city centre but also surrounding suburbs. Add to this projects like the £26m regeneration of Victoria train station and the creation of 25,000 new jobs within the Transformation of Manchester Airport and the signs for 2017 continue to look positive.

There’s a genuine startup culture within Manchester, fueled in part by the largest student population in Europe across its five universities, indeed the founders of both ResponseTap and Fatsoma met while studying at Manchester University and Manchester Met respectively. As well as this culture of startups, schemes like the £4m Green Energy Tech Hub and the Graphene Institute are providing places for new businesses and entrepreneurs to hone their skills and passion for new technology.

With a £2.2bn digital turnover in 2016 business leaders are confident that investment will continue in 2017, but whilst Chinese investors have given the city centre property market a much-needed cash injection it remains to be seen if this will be mirrored within the tech sphere. One positive sign is links with overseas private equity houses with the likes of JMI Equity investing in Cybersecurity company Avetco based near Manchester Airport.

Can the Boom Continue?

There are some potential clouds on the horizon though, as we covered previously the large student population means that there’s a massive talent pool in the city but employers are yet to work out how best to keep this talent in the city after they graduate. Katie Gallagher Director of Manchester Digital last year expressed concerns over the city’s ability to cope with the expected 30,000 new digital jobs created by 2035, particularly around the skills shortage leading to inflated wages and permanent staff looking for more lucrative contract roles. Others fear the attraction of higher salaries in London could lead to a brain drain, particularly with the advent of HS2. A recent KPMG study suggested that businesses with regional offices in the North could do more to attract and retain its staff within the Northern powerhouse.

Brexit is still seen as a threat to tech jobs across the UK and although Manchester-based UK Fast’s CEO Laurence Jones remains typically bullish citing a 40% job growth there are still some long term doubts on its impact. Some point to how freedom of movement (or lack of it) could affect a city that is already experiencing a skills shortage even with the boost from EU citizens currently working here. What will happen to this workforce beyond Brexit remains to be seen.

Overall here at Chroma Recruitment believe the outlook will remain positive into 2017. As a newly formed tech recruitment business based in the heart of the city we’d love to hear your feedback on this subject. Feel free to share this article and follow us on twitter and LinkedIn for all our latest news, articles and opinions.